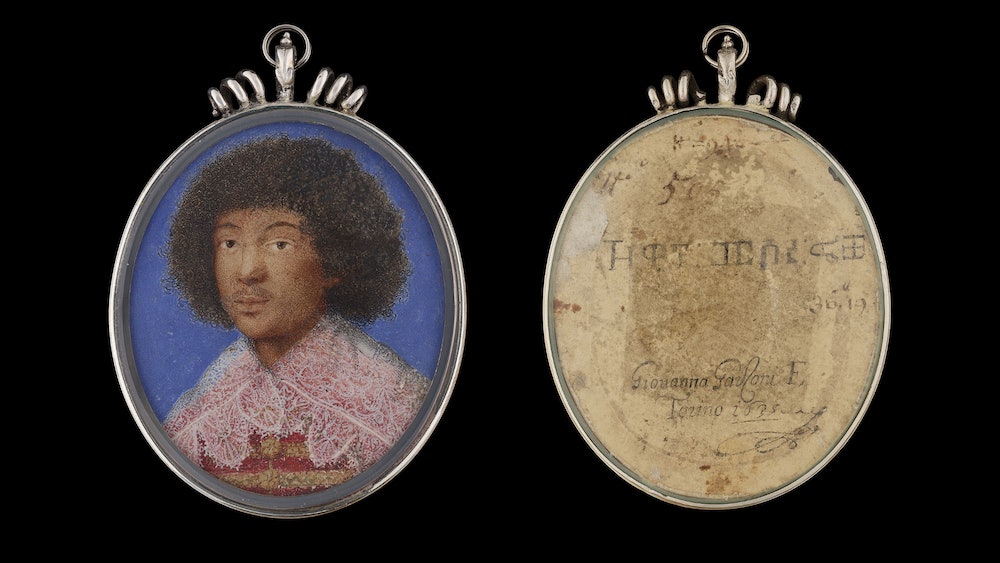 The portrait miniature in the cabinet nearby is a remarkable document of an encounter between an Ethiopian traveler, Zaga Christ, and an Italian artist, Giovanna Garzoni, at the court of the Duke of Savoy in Turin, Italy.

Zaga Christ arrived in Turin in the winter of 1634 after traveling throughout Africa, the eastern Mediterranean, and Europe. Claiming to be the rightful heir to the throne of the Christian kingdom of Ethiopia, he attracted both interest and suspicion from the Europeans he encountered as he navigated his way through the courts of the Italian peninsula.

Giovanna Garzoni was also quite familiar with these court networks, which were a primary source of patronage throughout her career. She met Zaga Christ and painted this portrait while serving as the miniature painter to the Duchess of Savoy from 1632 to 1637. She would then leave Turin and travel on to England, France, Florence, and Rome.

The mobility across expansive geographies reflected in the stories of Zaga Christ and Giovanna Garzoni is fascinating, but even more extraordinary is its visualization in this miniature. Few works of art so clearly reveal the movement of people—here by choice, though often by force—and the exchange of ideas and goods during the 1600s and 1700s. Throughout this gallery, special labels draw out these hidden stories in the AMAM collection.